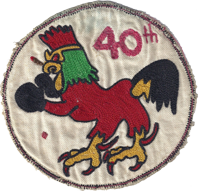 Anybody interested in meeting any of us previously stationed at Walker AFB is welcome to stop by the meeting room to remember old times etc. Should you be interested in preregistering and attending our banquet etc. and using the reduced hotel rates, please contact

I joined the US Army at age 15 years and then was transferred to the US Army Air Corps which later became The US Air Force. I retired in March 1966 after 20 years of active service. I write for The Veterans Voice Newspaper, “vetsvoice” (all one word online) and you can share some of my stories on the front page of that electronic version. I also write for other newspapers now and then and in our spare time my wife Dottie and I have helped to name several memorial efforts for our military. Mount KIA/MIA, in south central Colorado was named to honor all of America’s killed and missing uniformed armed services personnel, dating from the birth of our nation. The mountain is a bit over 11,200 ft high. To read about it just type in Mount KIA/MIA plus my name online.

We are thrilled that the Walker AFB Museum is going to happen and hope to see you all at the reunions of the 40th and the 24th this Fall. (Read Bruce’s story here)
Bruce L Salisbury
Aztec, New Mexico 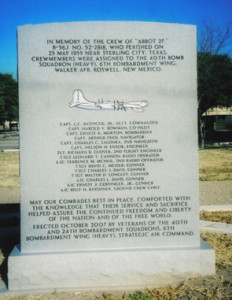 Abbot 27 Memorial at the Courthouse Annex in Sterling City, TX

Activation
The 6th Bombardment Wing, Medium was established on December 20, 1950. It was activated on January 2, 1951 at Walker AFB, NM. It then flew the B-29 Superfortress. In August of 1952, it received the new B-36 Peacemaker and the unit was redesignated the 6th Bomb Wing (Heavy) . The B-36 was flown by men of the 24th, 39th and 40th Bombardment Squadrons. Conducted strategic bombardment training from activation in 1951 until 1 Sep 1959. The 6th was deployed at Andersen AFB, Guam from October of 1955 to January of 1956.
The Jet Age
In 1957, the 6th Bombardment Wing, Heavy, began receiving the new B-52E jet bomber. They were flown by it’s existing squadrons. In September 1959, the 24th and 30th Bombardment Squadrons joined the newly assigned 4129th Combat Crew Training Squadron to train B-52 and KC-135 crews. The 40th Bombardment Squadron continued flying operational missions until 10 Jun 1960. From 10 Jun 1960 to 1 Dec 1961 the wing flew a few operational missions in a non-combat ready status. The 40th Squadron returned to operational status on December 1, 1961. The other two bomb squadrons regained tactical status on September 5, 1963. The 39th Squadron discontinued a few days later, but the 24th and 40th continued global bombardment training through December 1966, when they phased down for inactivation. The wing was redesignated the 6th Strategic Aerospace Wing on May 1, 1962;
Air Refueling
On August 1, 1951, the 307th Air Refueling Squadron was attached to the wing. It flew KB-29 tankers until deactivated June 16, 1952. On June 25, 1965, the 310th Air Refueling Squadron was attached to the wing. It flew KC-135s.
Missiles
The 597th Strategic Missile joined the wing on Sept. 1, 1961. It’s men manned the newly installed complex of Atlas missiles. Operations were phased out in February 1965 and the missile squadron was inactivated March 25.
Eielson AFB 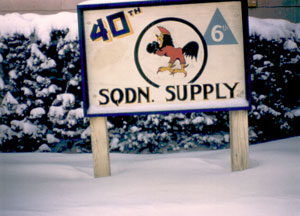