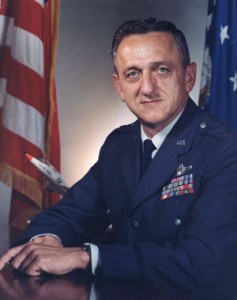 General Miller was born in Dearborn County, Indiana.  He attended the University of Minnesota from 1936-1940 majoring in petroleum engineering.  He entered the U.S. Army Air Corps as an aviation cadet in 1942, earning his commission and pilot wings with an aeronautical rating of first pilot.  He was a B-17 instructor pilot a Gowen Field, Boise before deploying to England with the 448th Bomb Group, a B-24 Unit.

General Miller remained with the 448th through two combat tours, flying 33 bombing missions, accumulating 200 combat hours.  He was the 448th station Commander before returning at the end of  World War II.   Many career assignments followed his return to the U.S. Air Force in 1947.  Most memorable among these were his last assignments as Wing Commander of the 92 Bomb Wing, Fairchild AFB (1958-1962);  Strategic Air Command Headquarters, Offutt AFB (1962-1965), Wing Commander of the 6th  Strategic Air Wing, Walker AFB (1965-1966); and Director of Personnel, Randolph AFB (1966-1968).
General Miller’s final assignment was Director of Personnel Training and Education, Deputy Chief of Staff, Personnel, Washington D.C.  He retired in July, 1971.  General Miller’s decorations include the Distinguished Service Medal, Legion of Merit with two Oak Leaf Clusters, Distinguished Flying Cross with one Oak Leaf Cluster, and the Air Medal with three Oak Leaf Clusters.

Les had two very fulfilling careers.  After retiring from the Air Force, he moved to the Grande Rhonde Valley.  He quickly turned his talents to growing cherries and working on his beloved “home place” with his wife, Evie.  With his son, John, Miller Orchards was formed, and with the addition of his son, Andrew, a 200 acre family agricultural business evolved, thus providing Les with his second 30 year career.

Those who wish may make contributions in his memory to the
Air Force Memorial
in care of Daniels-Knopp
1502 7th. Street
La Grande, Oregon
97850