Special thanks to Lt. Col. Jesse W. Mitchell, Ret. of Longview, Texas for compiling and providing all of this information.
Introduction to 509th Composite Group, 393rd Squadron (B-29)
Color Pictures of Nose Art on the original 15 aircraft.

There were two types of bombs:

One was called the “Little Man” which was dropped on Hiroshima. The bomb had not been tested, but the scientists were sure it would work. This bomb had the explosive power of about 15,000 tons of TNT. Basically, this was a Naval gun with the barrel sawed off. It was fitted into the bomb case and fired a projectile of uranium into a doughnut-shaped target of uranium at the en of the sawed off barrel. When the two pieces of uranium came together, the mass became critical and began a fusion process which created the explosion. The bomb was set to explode about 1500 feet above the ground. The igniter was controlled by barometric pressure. 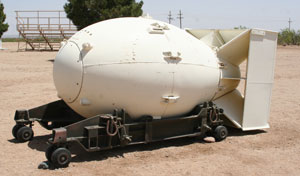 The other type of bomb was dropped on Nagasaki. this was the “FatMan” or “Pumpkin” bomb. It weighed 10,000 pounds and was an “implosion” type device. this type bomb was tested at White Sands,in southern New Mexico, prior to being used in combat. The scientists were not sure what it would do. It was designed to just fit into the forward bomb bay of the B-29. It was loaded by taxiing the aircraft over a pit which had a hydraulic lift, much like the lift in a garage where cars are worked on. The bomb was then lifted up and attached to a shackle designed to hold the weight.The “FatMan” bomb used much less uranium in its core than the “Little Boy” and was about 25% more powerful (20,000 tons of TNT).

The bomb had a very complex firing mechanism. Two additional personnel were required to monitor the bomb during flight. Oneperson was the Bomb Commander and the other was a Weaponeer. The forward top and bottom gun turrets were removed tomake room for the specializedequipment they used to monitor the bomb. They had a private interphone arrangementso the flight crew didn’t overhear their discussion about the bomb. The uranium core had to be inserted after take off and was physically and mentally a very demanding process. All crews had made practice drops with the bomb cases filled with concrete to simulate how the airplane reacted at bombs away time. A special maneuver was made to insure the plane would get away without damage from the bomb blast.

Many pages could be written about the intricacies of the bomb and the bombing process. The bomb was so short, compared to its diameter, that it might wobble and didn’t always drop straight. this trait was a nightmare to the aircrews as the barometric sensors might close due to the stresses caused by the oscillations and initiate the firing sequence prematurely. You can imagine what would happen to the crew and the B-29!

These two bombs were the only bombs in inventory in August of 1945. You will note that two of the B-29’s had returned to the states to get additional bomb components when the war ended. The components were probably nuclear cores for more bombs.