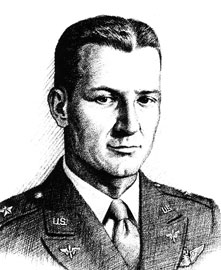 Kenneth Newton Walker was born in Cerrillos, N.M., in 1898. He enlisted at Denver, Colo., Dec. 15, 1917 and took his flying training at the University of Californias School of Military Aeronautics and at Mather Field, Calif., getting his commission and wings in November 1918. He became a second lieutenant (temporary) in the Air Service Nov. 2, 1918 and received a commission in the regular Army July 1, 1920. For three years he was a flying instructor at Brooks and Barron Fields, Texas, and Fort Sill, Okla.

In June 1922, 1st Lt. Walker graduated from the Air Service Operations School at Post Field, Okla. In December 1922, he went to the Philippines as Commander of the Air Intelligence Section at Camp Nichols. He returned to the United States in February 1925 as a member of the Air Service Board at Langley Field, Va. He stayed at Langley until 1928, having been adjutant of the 59th Service Squadron, commander of the 11th Bomb Squadron, and operations officer for the 2nd Bomb Group. He graduated from the Air Corps Tactical School at Langley Field in June 1929. After graduating, he served as an instructor at the ACTS until July 1931, when he became an instructor at Maxwell Field, Ala. He attended the Command and General Staff School at Fort Leavenworth, Kan., and graduated in June 1935.

Major Walker went to Hamilton Field, Calif., where he served for three years as Intelligence and Operations Officer at the 7th Bomb Group, commander of the 9th Bomb Squadron and varied group duties. In February 1938, he served as operations officer for the 5th Bomb Group at Luke Field, Ford Island, Hawaii; then executive officer at Hickam Field, Hawaii; and commander of the 18th Pursuit Group at Wheeler Field, Hawaii. (Note: Luke Field was on Ford Island, Hawaii. The United States acquired it in several parcels between 1906 and 1918. For a time, the Army and the Navy shared the island as an aviation installation. By the late 1930s, the Army completed its move to Hickam and the Navy retained exclusive use.)

In April 1942, Colonel Walker was assigned to Operations Division, War Department General Staff, Washington, D.C. In July of that year, he was promoted to brigadier general and transferred to the Southwest Pacific. In September he was appointed Commanding General, 5th Bomber Command, Fifth Air Force.

On Jan. 5, 1943, Brig. Gen. Walker was reported missing in action after a B-17 Flying Fortress mission over the Japanese stronghold of Rabaul, New Britain, Papua, New Guinea. Though intercepted by enemy fighters, his group scored direct hits on nine Japanese ships. General Walker was last seen leaving the target area with one engine on fire and several fighters on his tail. For his actions, General Walker was awarded the Medal of Honor posthumously by President Roosevelt in 1943.

In January 1948, Roswell Army Air Field, at Roswell, N.M., was designated Walker Air Force Base. Walker Hall, at Maxwell Air Force Base, Ala., home of the College of Aerospace Doctrine Research and Education, is also named after the general.

While at the Air Corps Tactical School in 1934, 1st Lieutenant Walker and four other ACTS instructors were invited to testify on the military aspects of aviation before the Presidents Commission on Federal Aviation. He and his colleagues presented arguments to support a separate air organization, not subordinate to other military branches. While Major Walker was at the War Plans Division, President Roosevelt assigned him and three other officers the task of developing a production requirements plan, due to the rapidly approaching world war. Walker and his team created AWPD-1 plan, the blueprint for the upcoming war against Germany. Later generations of Air Force leaders continued to recognize the merits of Walkers AWPD-1 plan. Walker is credited with being one of the men who built an organization that became the U.S. Air Force.